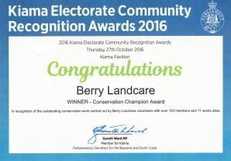 Shoalhaven Super Heroes Award 2016
Superheroes Events Ltd’ is a not-for-profit organisation made up of local Shoalhaven volunteers who are passionate about our beautiful ‘Shire’ and all things Pop Culture. The festival will also be raising money to acknowledge volunteer community programs as part of the Shoalhaven Superheroes Volunteer Awards.


Shoalhaven Landcare was nominated in the "Eco Green Sustainability" category and we WON!! 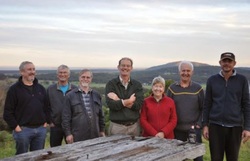 SLA Committee Meeting and Tour on 12 June 2014.
After the SLA Committee meeting on 12 June 2014, a tour was conducted to view some of the properties as part of the Berry Corridor.
Bill Pigott put together a Picture Story on Google+.
An excellent way to present some of Landcare's work. 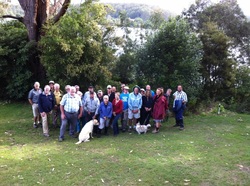 More than 50 people attended the field day, which visited three different sites that form part of a conservation corridor between the escarpment and the coast. 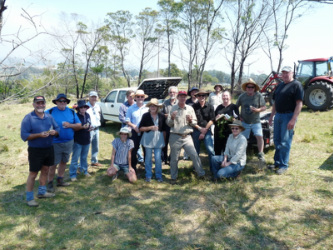 Nowra Hill Landcare hosts successful field day.
Around 20 people attended a field day at Nowra Hill on Sunday 20 October 2013.
Hosted by Wayne and Susan Bannister, the field day gave an understanding of different control methods available for some of the major weeds in the area.
Lantana and Giant Parramatta Grass cause problems throughout the area but help is available through Shoalhaven Landcare.
These weeds can be beaten!
For more information about Landcare please complete our contact form on the Contact Webpage.